Synopsis: Pema Rowan is the first born of the mysterious and powerful triplets whom prophesy has declared would unite in power and change the face of the Tehrex Realm forever, yet Pema and her sisters have eschewed their role in the world of magic in order to run their business. Pema’s life is turned upside-down when the blessings of Fated Mates returns to the realm. It is further complicated when a mysterious and gorgeous ursine shifter, Ronan, enters her life. Pema doesn’t want to be attracted to Ronan, especially since he once belonged to her archenemy. Pema faces danger left and right as she struggles with what her body wants and her mind refuses. As the High Priestess, Cele, seeks to garner the power of the triplets, Pema must choose between the safety of those she loves, or giving into her darkest desires.

Ronan Blackwell has come to Seattle with the female who has helped him find peace and solace after centuries of living with grief and isolation. When she ends their relationship, he is determined to win her back, only to have everything he has ever believed in challenged by the sexy little witch, Pema. As his emotions force him to choose between the only love he has ever known, and a passion that promises to tear him apart, he discovers that not everything is as it seems. Will the animal inside him win and show Pema the true meaning of life on the wild side, or will he be torn apart by the mysterious forces set against them?

About the Authors – Neither Brenda nor Tami grew up writing stories or dreaming of one day being authors but that changed when they shared a joint dream of creating a world to bring to life the stories of a group of dangerously handsome supernaturals.

Brenda is a Southern California girl who grew up in chaos, having ten siblings.  Her mother is a brave, courageous woman who gave birth to a small village of children and has successfully battled advanced stage breast cancer for almost two years.  Her parents did something right and taught Brenda how to persevere and accomplish whatever she set her mind to.  Whether that was completing her bachelors and Masters degrees, or writing books, she is always up for a challenge.

Brenda survived the brutal murder of her first husband, John DeCaprio, at the hands of the children he was counseling to go on and help children in similar situations.  Brenda remarried years later and now lives with her husband and their three fun-loving, energetic children.  She loves running, reading, cooking, and Monster Energy drinks.  And, Tami’s margaritas!

Tami is a southern girl, born and raised in Georgia. She is married and has two boys, so needless to say, she is surrounded by testosterone. We are trying to bottle Tami’s strength and positive outlook on life.  It has helped her beat breast cancer and she is a proud three-year survivor. She loves reading paranormal romances, running at the lake near her home, watching college football (Go Dawgs!!!), and is always in search of the next best margarita.

Their life journeys led them both to Texas and one another.  They fast became best friends and can always be found together.  Whether it’s lounging by the pool or writing steamy love scenes, they are frequently seen pissing themselves from laughter.  It’s embarrassing, really.  But that’s ok, life is good!

One lucky winner will get a $25 Amazon gift card

Excerpt from Pema’s Storm by Brenda Trim and Tami Julka

Pema nodded her agreement as she ran the duster over the shelf and candles. “That’s the problem with prophecies. They are vague, confusing—” She stopped talking when the tinkling of the wind chimes above the front door signaled they had a customer.

A cool breeze blew through the room, chilling the air. She twisted around to see the most stunning male walk through the door. He was easily six feet tall and had thick, brown hair that fell in soft curls around his ruggedly handsome face. He had a strong, square jaw that she immediately imagined running her tongue over. His warm, brown eyes invited her to share her secrets, and suddenly it wasn’t so chilly anymore.

Her gaze traveled over him and she noticed that his jeans were tight in all the right places, and she could easily make out his firmly muscled legs. He took her breath away and she desperately wanted him.

Her sex tightened with need, and arousal flooded her panties as she was overcome with an uncontrollable lust for this stranger and couldn’t focus on anything but getting him into the office for a quick tryst. She became light-headed when a feathering sensation in her chest set her heart racing. She wondered what was wrong with her. She was no blushing virgin, but she had never responded like this when looking at a male.

Reaching up to wipe the sweat from her brow, she lost her hold on the ladder. As she felt air rush past her, she never once thought to utter a spell. She blamed it on the fact that her brain malfunctioned from hormone overload. Rather than landing in an ungainly heap on the floor, she was caught by big, strong arms and an electrical current raced across her skin the moment they touched. She wanted to climb to the top of the ladder to have this male catch her again. Then again, that would mean him putting her down and she had no desire for that to happen.

“Are you okay?” His voice was gruff, and she loved it. The sound sent liquid heat spreading from her abdomen to her core and had her melting into his body.

As much as she didn’t want to, she needed to put space between them or she was going to lose control. She pushed against his broad shoulders for him to let her go. She didn’t fight it too hard when he refused to release her. “I’m okay. Nice catch, by the way. I’m not usually caught off-guard like that.”

She should tell him to let her go. Her lips parted to say the words, but they were trapped in her throat. She breathed in his earthy, pine scent and a new flood of heat traveled through her. She needed to gather her senses, and added more force to her shove until he finally set her down. Her body slid down the hard length of him and she took a couple steps back before acting on impulse to rub against him like a cat in heat.

“I didn’t mean to startle you. Are you one of the Rowan sisters?” he asked, holding out his hand. Did he crave contact with her as much as she did him? It seemed like an eternity to Pema since he had touched her, and she would die if he didn’t touch her again. Okaaay, she was losing her mind and she needed to stop this behavior.

Her brain and hormones weren’t on speaking terms, and she eagerly grabbed his hand and held it tightly. “Yes, I’m Pema and this is my sister, Suvi,” she nodded her head in the direction of her sister, keeping hold of his hand. “And you are?”

“My name is Ronan Blackwell,” the hunk said, keeping intense gaze into her eyes.

“How can we help you, Ronan?” Suvi asked, awakening Pema from her daydreams of ravishing his body. Realizing how odd it must seem to be holding onto his hand, she pulled from his firm grip and immediately felt a loss. She turned around to face the counter, needing to break eye contact with him.

Sirens Call Publications now accepting submissions for our 22nd issue of The Sirens Call — a FREE online publication. This month’s theme is ‘Supernatural’ and just in case you’re wondering what we’re looking for… 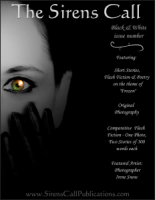 Definition of the term ‘Supernatural’ as offered on Google: A manifestation or event attributed to some force beyond scientific understanding or the laws of nature.

Examples of the supernatural:

Our definition of ‘Supernatural’: Anything not proven by modern science as being part of the natural world.