Joshua Skye recently released his novel Cradle, the pseudo-sequel to The Angels of Autumn, and now that he’s embarking upon his blog tour, I wanted to take a few moments to ask him some questions. If you’re not familiar with Joshua, here’s his bio which will give you a few juicy tidbits about him!

Award winning, bestselling author Joshua Skye was born in Jamestown, New York. Growing up, he split his time between Pennsylvania and Texas. Ultimately he settled in the DFW area with his partner, Ray – of nearly two decades, and their son Syrian. They share their lives with two dogs, Gizmo and Gypsy, and a chinchilla named Bella. Skye’s short fiction has appeared in numerous anthologies including Childhood Nightmares: Under the Bed, and periodicals such as The Sirens Call. He is the author of over ten critically acclaimed novels, among them The Angels of Autumn that takes place in the same nightmarish universe as Cradle.

Welcome Joshua! Let’s delve right into things: who is your favourite character in Cradle?

Radley. Not only am I proud of the full bloom of the character, he’s also the one that I identify with the most. There’s a little of me in Scotty as well, we come from such similar backgrounds.

Tell me, what was the hardest part of writing Cradle?

Characterization is always very difficult for me, but it’s also an aspect of the process that I ultimately am the proudest of. With Cradle, I knew character development was pivotal, absolutely paramount to the grand scheme of things. To bring the horror of the story home, readers had to empathize with my boys. I had to get it right, and thankfully I believe I did.

I’ve already mentioned that Cradle is a pseudo-sequel to the The Angels of Autumn: how are they connected? Is it theme? Setting? Characters?

The setting is of particular import to the entire series, so the two stories take place in Wren County. Angels is set in Wren Township and Cradle is set in Crepuscule’s Cradle. There are characters that span the course, Kincaid in particular. Themes are very significant, and the reader will find them throughout.

If you could tell readers one thing about Cradle that you think would interest them in reading it, what would it be?

I am a horror fan, diehard and unrepentant. If you like genre stories, you’ll like mine. I pull no punches and I love to break the rules.

Let’s switch gears for a moment and delve into what your significant other and family think of your writing career?

Ray and our son, Syrian are very proud of me. It is nice having their support. I wrote Xerxes Canyon for Syrian, though Ray says it’s too dark for him so he hasn’t read it yet. He did read Once Upon a Christmas Evil and was amused by it. I’ve had two bestsellers, and they are particularly proud of me there.

Do you have critique partners or beta readers?

Ray will critique me as I read the stories to him, he very often becomes a muse and will make suggestions and such. I don’t participate in writer’s groups or anything like that, and I am not fond of beta readers. I have tried collaborating with other authors, but the projects never worked out for one reason or another.

Is there one word that you can share with us that best describes you?

Switching gears again, is there a writer you idolize? If so who?

Stephen King. He’s amazingly talented and has a wonderful imagination. No one writes characters better than King. The Shining is one of my all-time favorite books, it’s incredibly vivid, scary as hell, and I particularly love that the hotel was itself a sentient character.

What are you passionate about these days?

I’m a huge fan of 80s horror movies, and I’ve started collecting the soundtracks on vinyl. I just received Firestarter as a gift. I love the movie and the music specifically by Tangerine Dream. The group composed for a few movies, and they’re all great. I also love John Carpenter’s music and very much want Christine, Prince of Darkness, and The Fog. There was a movie that came out recently called It Follows that has an amazing soundtrack. I’m looking forward to getting that soon.

Entice us, what future projects are you considering?

First there was The Angels of Autumn, then there was Cradle, and the final chapter in this trilogy will be “A Memoire of Madness” in which I am the main character, a very twisted version of me. I was inspired to do this by the BLOG tour I did for Angels during which I was challenged to write a piece breaking the fourth wall. It’s really morbid, I’m extremely excited about it.

And as a last morsel for readers, tell me about Cradle in 10 words or less…

Radley discovers that in the depths of darkness… evil dwells.

Thank you Joshua for taking the time to answer my questions!

Here’s a little information on Cradle… 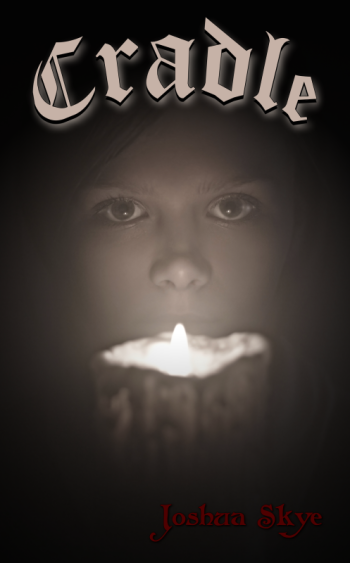 In the deepest vale of Crepuscule’s Cradle, in the cul-de-sac at the end of Direful Hollow Road, is a once grand Folk-Victorian home known as The Habersham House. It’s a place haunted by far more than rot and neglect – evil dwells here, an evil that craves children.

Eight-year-old Scott Michaels-Greene has a fascination for tales of the strange and unusual, especially local folklore. His favorite story is the one about Habersham House; a ruined old place where many curious children have disappeared.

Hours away from Crepuscule’s Cradle, in Philadelphia, author Radley Barrette has just lost the love of his life to a random act of violence. Amongst his endowments from Danny’s estate is an old house in the backwoods of Pennsylvania, Habersham House. Though grief stricken at leaving behind the only home he and Danny had ever known, he knows he cannot remain in the city. Besides, the isolation may be just what he needs to clear his mind of the writer’s block he’s suffering from.

Crepuscule’s Cradle is not as he imagined. The locals are inhospitable. The skeletal forest surrounding it is as unwelcoming as the town. And the house itself – there is something menacing, something angry inhabiting it with him, and it’s hungry. Radley’s world slowly begins to unravel; the fringes of his reality begin to fray. In the midst of his breakdown, a local boy with an unhealthy fascination for Habersham House begins sneaking around and the evil residing within has taken notice.

Blending fantasy with horror, Crepuscule’s Cradle is the darkest of fairy tales. The morbidity of classic folklore and contemporary style weaves a web of slowly encroaching unease. Radley Barrette’ winter bound home is more than a haunted house, and Crepuscule’s Cradle is more than a mere horror tale. It’s a bedtime story that will pull you into its icy embrace, lull you into a disquiet state, and leave you shivering in the dark.

Cradle is available online at: 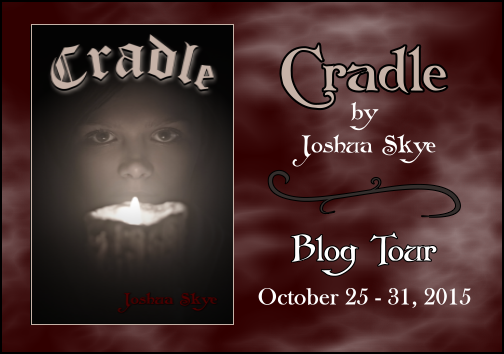