Today I’m pleased to feature an interview with Aiden Truss, author of Gape. Welcome Aiden, why don’t you take a moment to introduce yourself to the captive audience that you now have before you.

I’m a forty one year-old geek who still thinks that he’s twenty-one. Despite never having grown up, I’ve now been married for twenty four years and have two sons who have grown up against all odds to be strangely well adjusted.

I spend my time flitting between high and low culture: I hold an MA in Cultural and

Critical Studies and can often be seen stalking the galleries and museums of London, but I also like watching WWE, listening to heavy metal music, collecting comic books and playing classic video games. This confuses many, who seem to think people should be either high or low-brow in their interests, but I enjoy the confusion.

In terms of appearance, I’ve been told that I look like a bouncer or a builder and have had people laugh at the suggestion that I might have an artistic side.  I’m always glad to confound their expectations.

I grew up in South London but now live in Kent, England. Gape is the second novel that I’ve written but the first that I’ve attempted to have published. I’m also working on a collection of short stories, a novel about growing up as a geek, and I’ve written a few thousand words of the sequel to Gape. I have to admit though, that I’m scared to commit to it fully in case no-one reads the first book!

Tell us about your writing process?

Like many writers, I keep a notebook to jot down ideas, names, chapter headings and book titles. If someone says something interesting in conversation then it goes into the book. If I’m people-watching and notice a particular trait or affectation then it all goes in the book.

When I actually have an idea for a story, then I sit down in front of my laptop and just go for it. I then refer to my notebook if I need a character name or an idea for something. I also use it to keep a track on characters and minor plot details. I don’t plot anything out in advance – I can’t work that way.

I procrastinate and find diversions like everyone else, but force myself to write 2,000 words a day when I’m really going for it. I have no routine as such and might start at 7.30am and finish at lunchtime or I might go all day writing very little and then have a sudden spurt of creativity around midnight and not get to bed ‘til 3am.

Is there a genre, other than the one you currently write in, that you wish you could break into?

I love science fiction, but I’m not sure that I’m scientifically clued-in enough to write anything really convincing. I’ve tried short stories, but am not confident enough to go for anything really lengthy. The best writers in the genre all have a weight of intellect behind their work I don’t possess.

If you had asked me about working in a different medium, then that would be easy: I’d love to see Gape as a graphic novel or a comic book series. I’d be more excited about that than if someone was to offer to make a film of it.

What are the 5 books that have influenced you the most, and why?

First would be Charlie and the Chocolate Factory by Roald Dahl. Other than Dracula, this is probably my most read book. When I was younger I’d read it from cover to cover and then go back to the beginning and start again. I was a Dahl fan in general – he had such a dark view of childhood that was delightful.

Bram Stoker’s Dracula would be the second. It scared me out of my wits when I first read it when I was around 11 years old. I’ve read it over and again and have about nine or ten different versions of the book in various covers and editions. My favourite is Leonard Wolf’s The Annotated Dracula.

Third would be George Orwell’s 1984. I can’t say that it has influenced my writing so much as it opened my eye to the power of language and how it shapes our perception of the world. That much of what scared Orwell has now come to pass is regrettable, but at least we were forewarned.

I was never a big Tolkien fan, but I remember someone lending me Terry Brooks’ The Sword of Shannara. This really turned me on to fantasy novels in a big way. I know that purists see it as a derivative work which draws on all the usual fantasy tropes and archetypes, but it was so exciting to read at the time.

Finally, if I had to choose, I’d cheat and go for a trilogy, Stephen Lawhead’s Pendragon Cycle: Taliesin, Merlin, and Arthur. I’ve read a lot of Arthurian fiction but these books put them all in the shade – including Mallory’s Mort d’Arthur. Taliesin was the first book that I can remember that actually moved me to tears.

If you could cast one of your works, who would you choose to play your main characters?

I was asked this before and I suggested Ben Whishaw as Priest and Mary Elizabeth Winstead as Rose – both actors that I really like. I didn’t think about who might play Astolath, but after a bit of rumination, I quite like the idea of Kane of WWE fame playing the arch demon. I think he’d have the required ‘presence’ to carry it off.

What is the first thing you would do if you woke up one morning to find one of your books on the NY Times Bestsellers List?

Turn around and go back to sleep again. After all, I probably wouldn’t have to work again for a while!

Do you have any vices that you turn to while you are writing?

Only caffeine. I don’t need any more distractions!

What do you do when you’re not writing?

I read a lot and generally have two or three books on the go at the same time. Other than that, I go to quite a few gigs, I collect horror movies and memorabilia and comic books. I’m also a dyed-in –the-wool gamer and have about twenty different consoles and handhelds – much to my wife’s disdain!

Please share with us the first nine lines of your current work-in-progress.

He was awake but just not ready to move.

The thought of movement and of actually facing the full onslaught of the day agitated the tiny butterflies living in his stomach and so he just lay there staring at the insides of his eyelids. He listened to the soft hiss of the machine next to his bed which was feeding air to his breathing mask. Beside him, his wife slept. She stirred slightly as if aware of his discomfort but not waking to fully share it. With a titanic effort he sat up, reached for the off button and pulled the mask from his face.  It was no use trying to avoid the inevitability of the day. The bedside alarm would soon shatter the calm anyway and the house would be full of voices and activity. Better to try to grab a coffee in peace before having to show a brave face his family, let alone to the world beyond his front door.

Where do you find your inspiration?

In the works of other writers. 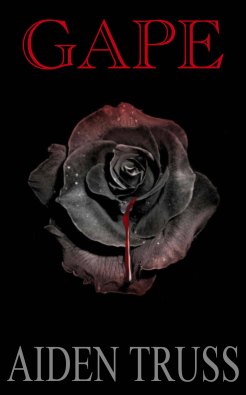 When Rose woke up in her favourite shop doorway, she was resigned to yet another day of hunger, struggle and abuse. This was life on the streets after all.

What she wasn’t prepared for was a visit from a demon, an invitation back to his temporally insubstantial sanctuary, and forced to take sides in a battle involving most of the denizens of hell. Oh, and a boat trip down the river Thames.

After a disappointing start to the day, things were about to get a bit more interesting…

If you’re interested in picking up a copy, Gape can be found in both digital and print versions.

Thank you Aiden for taking the time to answer my questions. If you’d like to keep up to date on Gape and Aiden’s writing, you can find him on his website or Facebook Fan Page.

One thought on “Nine Questions with… Aiden Truss”